This week week during Tot School we did a variety of things.  Lil’man was so blessed to recently receive Melissa & Doug Deluxe 10-Piece Magnetic Fishing Game 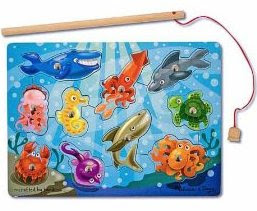 He loves it.  He struggles with getting the animals back into their spots, but loves using the fishing pole to pull them out.  It definitely adds a twist to playing with puzzles.  As we played with it, we reviewed the names of the animals that we learned about this summer and even learned some new ones.  We also pulled out our magna-doodle.  He enjoyed scribbling all over it.  The best part was when he would show me the pictures he made, he would name it,  “Look, mama.  Cow…mooo!”  It was too cute.  The race car that his daddy made for him came out several times this week, also.  As well as a recorder that was mine when I taught.  I played him a few songs on it, while he would try to play along moving his fingers like me.  Then he would say, “(Lil’man’s) turn.” He placed it in his mouth correctly, placed his fingers around it and then blew.  Let’s just say it was loud!  To end the week we did a fall pumpkin craft and played with legos.

To see this week in action, check out the slide show below:
If you would like to see what other tots have been up to this week visit 1+1+1=1.