We returned to Tot School this week after a long and wonderful holiday break. (By the way, Merry Christmas and Happy New Year to everyone!) This month we are jumping into letters, which ended up being perfect timing because my son is really into them right now.  We also will be doing snow activities.  Again per…fect timing…we got a nice snow shower this week, which gave us 3 inches of fresh powdery white snow!!!  I get so excited when things just seem to fall into place!  🙂
Our first day of Tot School, Lil’man wanted to get out play dough.  I think he is loving the new color selections.  I know I am!  Since we are focusing on snowy wintery wonderland stuff, I had to pull out the blue. (We’ve had enough of the white, it was the only color we had all summer.  Besides, it was pretty much ruined because a certain blogger, names will go unmentioned, ahem…left it out by a window and soon condensation set in, which left a sticky mess!  Yes, playdough players beware, sun + play dough in a closed container = no fun for mum!) 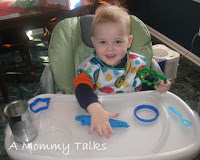 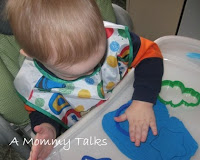 Lil’man also enjoyed playing with his Leap frog letters.  Before focusing on one specific letter, we just enjoyed playing with all of them.  I went ahead and created a palm tree out of construction paper and then Lil’man got to follow along as I read Chicka Chicka Boom Boom.  (A Totally Tots inspired lessoned.) 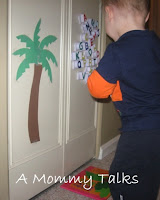 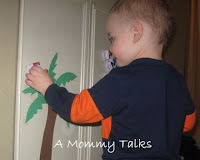 Then of course I had to pull out one of our recently passed down play clothes! (If you didn’t know, I have a theater degree and I L O V E to act!) Lil’man really enjoyed pretending, but he liked looking at himself in the mirror much more!  And I totally don’t blame him…he is one cute lil’ fireman! 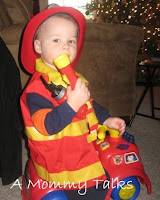 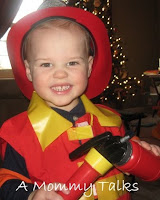 Our second day of Tot School, included more letter work.  I just have to put a shout out to Leap Frog right now because my son loves playing with these educational toys.  Besides playing with this, he got to watch his Leap Frog Letter Factory DVD.  Between these two toys my son has already learned the majority of his letter sounds!!!  He constantly points out letters to us and says, “D a D says duh.” 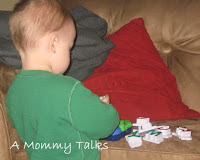 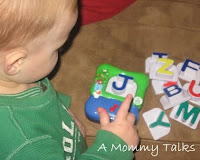 We next attempted this snow collage that I was totally excited about and thought it would be perfect for my Lil’man.  First, I had him help me tear the white paper up…he wasn’t too excited about that and kept saying, “mommy help.”  I have no idea how I ended up with a kiddo that doesn’t like to rip things apart.  Bizarre!?! Unfortunately, the second part didn’t go quite as I planned.  Instead of putting each little white piece individual on to the star I had so neatly created with glue, he decided to take heaping handfuls and sprinkle it on.  Of course he didn’t stop there, oh no.  After he covered the star he decided to try to clean it up.  His art process turned my pretty snowflake into a fat snowball.  He is such a boy! 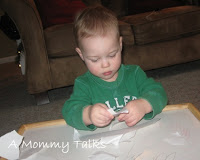 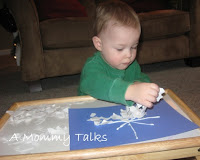 Last but not least, and probably the most favorite activity he took part in this week was the water table turned snow table.  Since the temperature was just a bit chilly…brr! (Single digits with the wind chill!) We, or I guess I should say I, decided to forgo playing outside.  But, who says you have to be cold to play in the snow?  Lil’man receive this fabulous water table from his Meme for Christmas, so of course we had to get some use out of it. He played in the snow from the warmth of the kitchen for about an hour.  He even brought a couple of his arctic animals to join in on the fun. 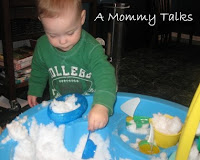 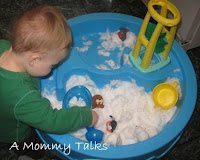 Well, that was our 2 days of Tot School.  Thanks for stopping by and don’t miss out on what other tots did this week! Visit 1+1+1=1.