This week we focused on the letter A. Unfortunately, I wasn’t able to capture as many pictures. Don’t you hate when you camera batteries die!

On our first day of Tot School we colored a picture of an Aa is for Alligator My son loves to color! When I got this activity out I had a couple of green crayons pulled out for him, but he wanted to pick his own colors. So, I am not going to impede his creative genius. 🙂 I love that I was able to find a picture to match his Fisher-Price’s Animal Zoo animal. I don’t know how easy of a task the rest of the letters will be, but it is my goal to match them too! 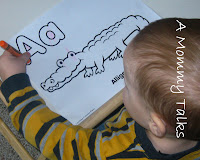 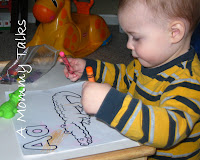 We also did A is for Ambulance using our bingo chips.  Of course Lil’man thought it needed a little more color, so he colored it first.  He wasn’t as into this activity as he was when we did the S is for Santa. 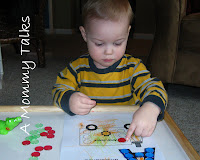 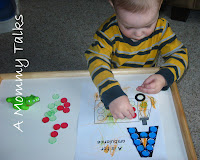 On the second day of Tot School, we did some more “snow” type activities.  Lil’man spooned cotton balls into a snowman muffin “tin” that I found at Dollar-Spot in Target last month (or was it November?) I don’t remember. He played with this activity throughout the week, as a snow tub.  His A to Z Animals and Sesame Street figurines had a blast playing in the “snowballs.” 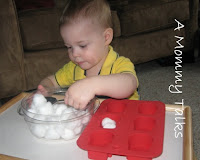 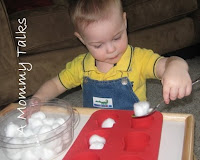 Lil’man also created an alligator, which we found on DLTK’s Growing Together.  After he finished coloring it, I cut it out.  We then glued the parts together. It was at this point that my camera died, so I don’t have a picture of the finished product. 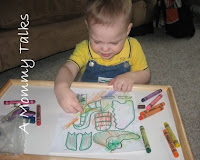 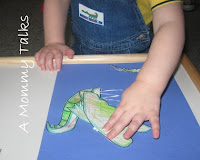 Some other things we did that I wasn’t able to capture pictures of were:
Letter A-
Snow stuff-
Thanks for stopping by and don’t miss out on what other tots did this week! Visit 1+1+1=1.