We had another busy week that wasn’t organized, but was still learning.  Monday we celebrated Mr. P’s birthday and that evening took a tour around town checking out all the various Christmas lights.  Unfortunately, I don’t have any pictures for the “Griswald” type houses we saw, but I will just say WOW! Lil’man didn’t say much but just stared out the window in awe. 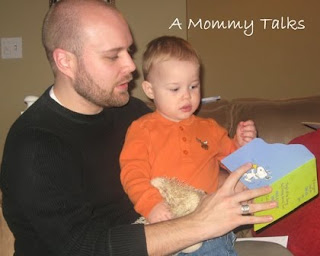 Wednesday we hung out with my sister’s family and visited the biggest gingerbread house I have ever seen!  And yes, if you are wondering, it is made out of real candy and ginger bread bricks. 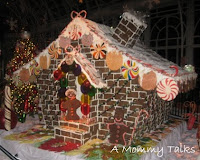 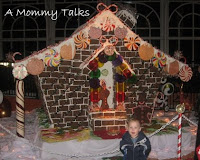 While at home, Lil’man enjoyed playing with all of his toys, especially his Leapfrog letter magnets.  He also enjoyed watching the letter factory, which he received for his birthday.  I unfortunately didn’t take many pictures, but I was able to capture a couple of things.

One activity that he loved and played with for over an hour was play-dough. (If you can’t tell this was at the beginning of the week…that’s why I have so many pictures.) I finally purchased him color play-dough and we pulled it out this week.  We used cookie cutters to create Christmas trees. 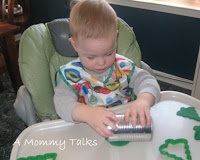 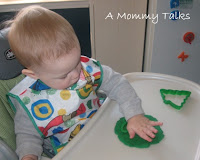 After making a few Christmas trees, I decided to pull out some of his foam beads.  I showed him how he could use the beads to decorate his trees. 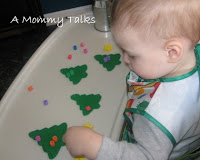 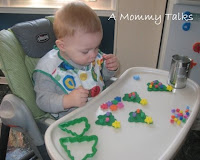 He enjoyed doing this for a while and then he decided to match his color star beads with the color circle beads. (I pushed them all together to get it all captured in the picture, but he created the pattern all by himself.) 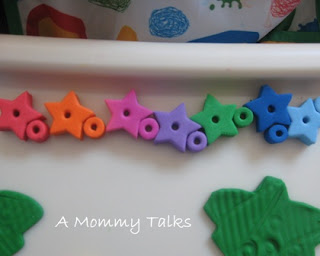 Later that week he wanted to play with the beads again.  So, we pulled them out and this time to make it a little harder for him I gave him a pipe cleaner, instead of a wooden skewer.  He got a little frustrated with the pipe cleaner because it kept bending on him.  Eventually, I pulled out the skewer and he quickly filled it up with his foam beads. 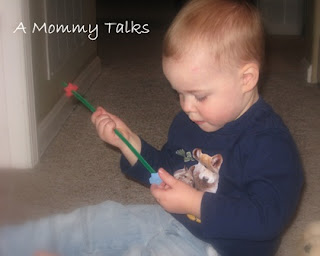 I won’t be posting Tot School next week because we will have relatives in town, but if I get the desire I may still write some posts related to our Christmas activities.  Although, if you have been checking here recently you can see that my blogging has been few and far between…so I don’t make any promises.