This week we focused on learning all about the desert.   Here are just some of the things we did. You can see other activities from this unit by visiting Amber at The Belly of The Whale.
Language Arts: Lil’man reviewed letters by tracing over them with his pointer finger.  The surprise was the letters were written on a fine grit sandpaper.  He did the whole alphabet, but he never went back to it again. So, I guess it wasn’t his favorite task. 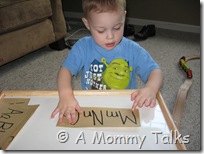 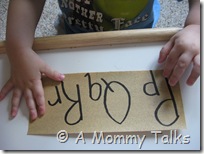 Here are some of the books we read this week.
Math Concepts: Lil’man  has been working on recognizing patterns.  Right now he is just copying a pattern that is already created.  After we did a few, instead of revealing the whole pattern I had him tell me what he thought would come next. 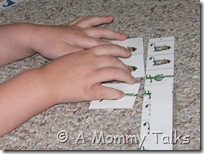 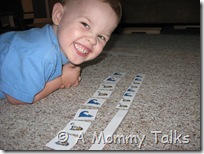 He has also been working on modeling the whole numbers 1-10.  This was the first time he used miniature clothespins

He really struggled with the clothespins, but started getting the hang of it after awhile.  To make it a bit easier for him I stuck the cactus cards in a styrofoam ball that I had cut in half. 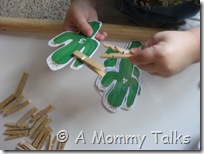 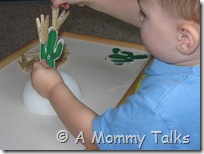 Science Concepts: We learned about all sorts of desert animals and plants by doing various activities.  One activity that we did at the end of the week was a plant and animal sort.  Lil’man wasn’t familiar with the term plant, so we  first had to talk about it.  Of course he would say, “No, that’s not a plant, that’s a flower.” 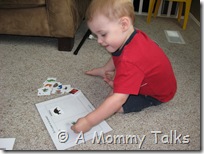 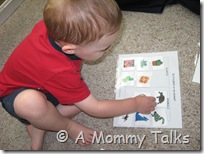 Extras: We did a fun art project this week.  I cut a desert scene out of some sandpaper and then covered it with paper.  I then had the boy find out what was under the paper by rubbing his crayons on it.  Again this was a new thing for him, so I had to show him how it was done.  I went ahead and did the sky and sun.  He got really excited when he saw the cactus show up. 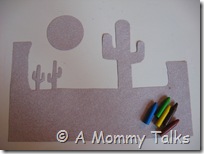 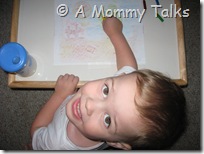 For Fun: Here is my favorite shot from the week: (He was so proud of himself! 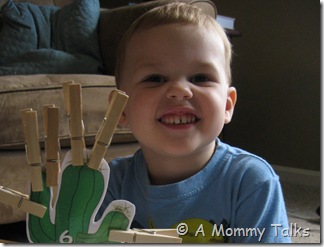 So, there you go, that was our week.  Don’t forget, you can download all the printables  (not all seen here) for FREE  at 2 Teaching Mommies.

Next Week we will be focusing on The Farm! I hope you stop by to check it out!