Life has been crazy in our household the last couple of weeks with Thanksgiving, birthdays, doctor appointments and Christmas shopping. Therefore, this post is going to include pictures from the end of last month, since I didn’t get a chance to post what we had been doing. (Sorry.)
To finish off the month of November (23-27) and to celebrate Thanksgiving,  Lil’man did a few holiday related activities.  The first was the Felt Turkey (seen on many blogs, but I originally found it on Itty Bitty Love.)  He wasn’t quite ready for this activity as you see below.  He preferred to stack the felt feathers on top of each other. 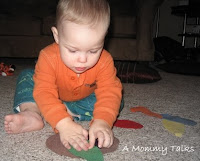 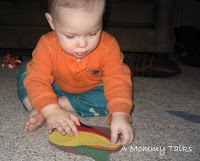 I also created a Pilgrim and Indian Game.  Lil’man wasn’t too interested in playing the game, but he did enjoy moving the magnets around on the closet doors.  At first he just put them anywhere, but then he started trying to put the characters together correctly.  His cousins really enjoyed this game during our Thanksgiving festivities.  Unfortunately, I didn’t capture any photos of them playing with it. 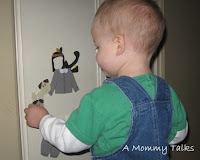 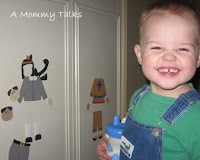 Play-doh is always a favorite.  I pulled out some pumpkins and a football for him to press into the dough.  Our play-doh was really wet and sticky, which ended up making it a little to messy for Lil’man.  He kept asking for a napkin, so I he could get it off his hands. I think it developed condensation on the inside because it was a little too close to the window. During the Black Friday sales, I picked up an play-doh assortment, so this month you might actually see a different colors of play-doh. 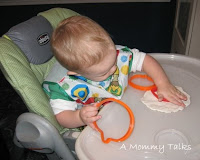 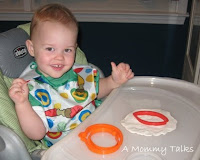 He also enjoyed our Shape Pilgrim stArt activity.  Of course I learned that when gluing pictures it is easier for him to put the paper on the glue spot, then place a piece of paper with glue on to the other piece.  Again, he doesn’t care for the sticky stuff on his fingers. 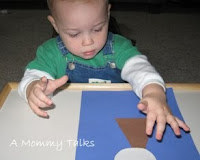 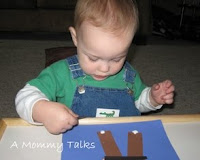 Now, for the week of Nov 30th- Dec 4th.  Lil’man really enjoyed cooking.  It really is one of his favorite things to do.  Recently, on another note, he has become especially attached to his stuffed puppy.  I am not sure though, what his puppy did to end up as the main course for the evening. 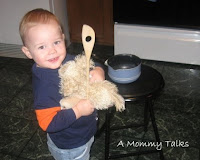 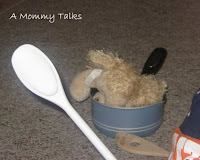 We were so excited when our Little People Nativity arrived in the mail.  At first he wasn’t sure if he could touch it, but once I encouraged him that it was ok, he had a lot of fun.  His favorite pieces were the animals and the wise men.  He told me all the animal names and what sounds they made.  He then took the cow and pretended it was eating the roof…it is made of hay! 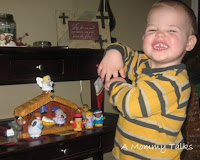 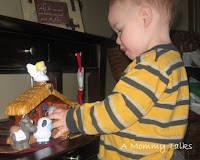 For his birthday, he received some great gifts.  One was a set of puzzles.  He did really well at putting the pieces into the right slots.  I think it helped that these particular puzzles had the exact pictures underneath. 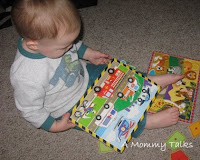 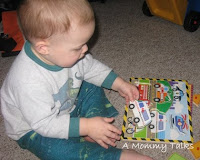 He also, received Melissa and Doug Trace and Lace Farm.  He had a hard time focusing on this task because he wanted to play with the other farm animals that were included.  Next time, I will make sure to only have one animal out at a time.  He struggles with pulling the lace through the hole the entire way.  This activity is probably going to be a collaborative activity for awhile, but it is encouraging to see that he is interested in doing it. 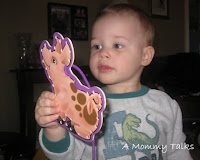 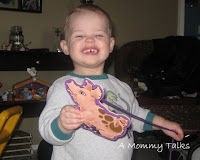 Well, that was our Tot School for the last couple of weeks.  Sorry, to bombard you with two weeks worth of activities.  Hopefully, I will be back into my routine for this week, so don’t forget to come back  to check out what we’ve been up to. If you would like to see what other tots did this week visit 1+1+1=1.


Oh yeah, we also got our groove on!