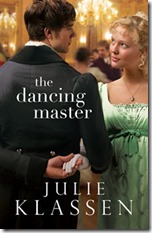 The Dancing Master by Julie Klassen takes place during the early 1800s in the small village of Beaworthy.  The main character Alec Valcourt flees from London with his sister and mother after a scandal erupts.  He hopes to start fresh in Beaworthy, but soon discovers it won’t be that easy in this small community with untold secrets.

Julia Midwinter grew up feeling unwanted and unloved.  She wants nothing to do with her home town and will do anything to escape it, including flirty with any man that would sweep her far away.

Storyline
“Finding himself the man of the family, London dancing master Alec Valcourt moves his mother and sister to remote Devonshire, hoping to start over. But he is stunned to learn the village matriarch has prohibited all dancing, for reasons buried deep in her past.
Alec finds an unlikely ally in the matriarch’s daughter. Though he’s initially wary of Julia Midwinter’s reckless flirtation, he comes to realize her bold exterior disguises a vulnerable soul–and hidden sorrows of her own.

Julia is quickly attracted to the handsome dancing master–a man her mother would never approve of–but she cannot imagine why Mr. Valcourt would leave London, or why he evades questions about his past. With Alec’s help, can Julia uncover old secrets and restore life to her somber village…and to her mother’s tattered heart?.” (Bethany House)

Overall Thoughts
This was the first Julie Klassen book that I read.  I was eager to get in to it, especially knowing that she and I are huge Jane Austen and Charlotte Brontë fans.  The Dancing Master, however, took forever to grab me.  It wasn’t until I had read that first 100 pages that I finally felt like I got a “nibble” of something to keep me “fishing” longer.

Though, I could highly relate to Julia Midwinter’s feelings and could even understand her recklessness to find love due to her relationship with her father, I hated that Alec preferred her to other women in the novel.   However, it is the message she learns and not who she falls in love with that makes this novel.  It is a message that we all need to hear, more than once.  I message about who we are in the eyes of our Heavenly Father, that we are loved no matter our crimes. And even though we are unworthy, He offers us forgiveness and grace if we are truly repentant.