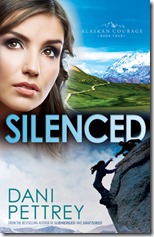 Silenced by Dani Pettrey is the fourth book in the Alaskan Courage series. This book travels between the two Alaskan islands, Tariuk and Imnek. Like in her previous books, Pettrey dives straight into action, when Kayden McKenna is mountain climbing and stumbles upon a climber who had fallen to his death.   With her climbing expertise, she soon discovers that it was no accident but murder. Teaming up with Jake Westin the two set out to find the murderer and end up discovering more about each other and the truth of their feelings.

Storyline
“After Kayden McKenna discovers the body of a fellow climber, she and Jake Westin team up to investigate the death—provoking threats on her entire family.” (Bethany House)

Overall Thoughts
For some reason Silenced took me a little longer to get into compared to the first 3 in the series.  And honestly, I’m not sure why.  It was definitely entertaining, but I think busyness of life just prevented me from focusing in on it.  However, even though I didn’t burn through it at first like the others it wasn’t long until I couldn’t put it down.  While I still enjoyed the first half, it was the last half of the book that kept me on my toes and wanting to know what was next.

As in true Pettrey form, she continues to bring in the right amounts of suspense  and romance, while developing the main characters.    This particular book didn’t have a character with an obvious spiritual battle, but one that was seeped into their lives and pour out in their every day living.  Jake was working through his past regrets.  I loved learning more about where he came from, who he was and why he tried to bury his past. Kayden lived in fear of her future.  Instead of living her life to the fullest she lived it as if she were doomed to inherit the illness that claimed her mother.  Though this battle wasn’t necessarily conquered in the book, it was Jake who brought it to light and reminded her that God didn’t promise it would be easy, but that He would carry us through it.

Silenced also set us up for the last book by bringing a transformed Reef back and introducing us to Kirra the town vet, or as Reef remembered her from their school days “Killjoy Kirra.”.  I’m curious to know what happened to her in her last relationship that left her struggling with nightmares.

All in all, another good book from Dani Pettrey.  I look forward to seeing how the Alaskan Courage Series comes to an end.

More on the Alaskan Courage Series