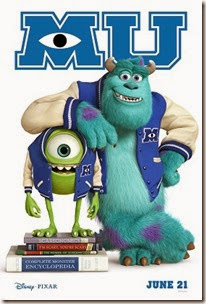 Mike and Sulley weren’t always best buds and Disney’s Monsters University tells the story of how their friendship came to be so strong. It’s a classic weak-unite-to-beat-the-strong storyline loaded with laughs and a few heartfelt moments.

Similar to the first movie, Monsters University had a message that friends can accomplish more together than alone. Mike and Sulley find themselves relying on each other and a group of misfits for a chance to stay in the scare program. The movie also teaches kids to look past the exterior and see that some of the people we are prone to overlook are capable of the unexpected. You’ll also find a message about honesty and resisting the urge to win at all costs.

Storyline
Ever since college-bound Mike Wazowski (voice of Billy Crystal) was a little monster, he has dreamed of becoming a professional Scarer—and he knows better than anyone that the best Scarers come from Monsters University (MU). But during his first semester at MU, Mike’s plans are derailed when he crosses paths with hotshot MU legacy James P. Sullivan, “Sulley” (voice of John Goodman), a natural-born Scarer. The pair’s out-of-control competitive spirit gets them both kicked out of the University’s elite Scare Program. To make matters worse, they realize they will have to work together, along with an odd bunch of misfit monsters, if they ever hope to make things right.

Overall
If you liked Monsters Inc. you will enjoy this follow up. While Cars 2 seemed to diverge from the tone set in Cars (i.e., cars shooting at each other, impossible-for-kids-to-solve mystery element), Monster’s University stays true to the spirit of Monsters Inc. I will say I was a bit nervous though when Mike and Sulley found themselves walking into a party at a fat house, but the scene didn’t feature any of the college shenanigans that you might expect. Monsters walked around with the “red cups” and I recall seeing one monster taking a fall from too much to drink but that was about it.

Lil’ Man loved Monsters University. It’s practically all he’s talked about since we saw it. He’s been developing his own movie with some of the characters from MU and a few of his own creations. We are, however, having a hard time explaining to him why we won’t be able to get the same people to do the voices for Mike and Sulley. (We don’t have those kinds of connections…yet alone that much money.) 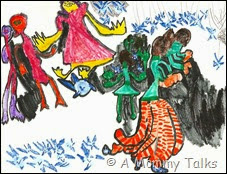 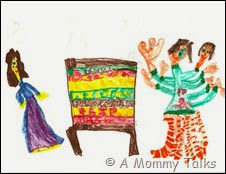 This was a great family movie and one we recommend.  Have you seen it?  What did you think?

Some extras
Looking for some fun family activities to go along with this movie?  Check out the free monster resources from 2 Teaching Mommies.  Plus, make sure and grab the family kit from Disney below.