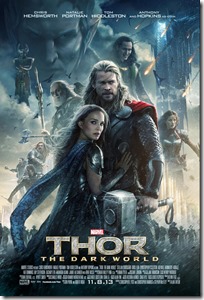 Darkness has existed in the nine realms since their beginning. The Aether, a weapon of the Dark Elves, cannot be destroyed so it is hidden, but is discovered unknowingly as the nine realms near perfect alignment, a phenomenon occurring only every 5,000 years.

Sounds like the kind of mess only Thor and his cohorts from Asgard could clean up.

Storyline
Thor: The Dark World puts the hammer-wielding superhero back in center stage for a fun, action-packed and often humorous feature. Faced with an enemy that even Odin and Asgard cannot withstand, Thor must embark on his most perilous and personal journey yet, one that will reunite him with Jane Foster and force him to sacrifice everything to save us all.

Overall
The Avenger franchise continues to wrestle with the themes of good vs. evil. Loki, Thor’s malcontented brother, finds himself in prison for crimes against Asgard, but Thor calls on him for help defeating Malekith. Trust is another big theme in this one. Thor and Loki have a rather checkered history (see The Avengers–New York never saw it coming), but they must work together to avenge Asgard. The theme of sacrifice is also explored. An immortal Thor has choices to make when he falls for a mortal Jane Foster.

The Bottom Line
Even if you weren’t a fan of the first Thor, you will love Thor: The Dark World. The action will keep you glued to the screen and the humor will take the edge off the overriding dark themes of the movie. This is must-see theater viewing.

A Mommy Talks Review Disclosure: I  received passes to attend the featured movie for this review, at no cost, from Disney for my honest review. I do not accept monetary compensation for reviewing or writing about products. All opinions expressed are my own.