The verse you will be working with your child on this week is Genesis 1:27. 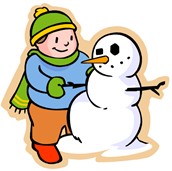 “So God created mankind in His own image; in the image of God He created them.”

Talk with your child about the following:
Its fun to build snowmen, isn’t it?  I know that this snowman isn’t made of real snow, but we can pretend, can’t we?  When we build a snowman we try and make it look a little bit like us.  We give him eyes, a nose, and a mouth, then we’ll use sticks and give him arms, huh?  Sometimes we even put a hat on him!  When we build a snowman, we take a bunch of regular snow and make into something special!  Our verse today tells us that God built us, kind of like we built the snowman.  Not only did he build us, but he built us to look like him!  He didn’t make us out of snow, though, did He?  Do you want he made people from?  The Bible tells us that he made boys and girls out of dirt!  That’s kind of neat isn’t it?!  He made sure that everything on us was just like he wanted it, the same way that you made sure that everything on your snowman was how you wanted it.  Because we know that God loves us very much, we know that everything He has put in place on us is just like He wants it.   Let’s thank God for making us just like He wanted in His image!

Dear Father, we thank you that you are a loving creator.  We know that we are made in your image, and that we are just like you made us to be.  We ask Lord that you would also make our hearts just like you would want them so that we might serve you better and love you more.  Amen.