The verse you will be working with your child on this week is Genesis 6:19. 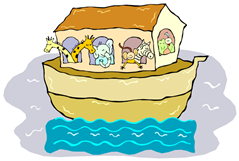 “Bring into the ark two of all living creatures, male and female, to keep them alive with you.”

Talk with your child about the following:
This week we’ve been talking a lot about the zoo and the animals we see there.  Today we read about a story in the Bible about a man name Noah.  Do you remember what Noah built?  That’s right!  He built a big boat, called an ark, because God told him to.  Do you remember what Noah took on the ark with him?  He took animals, and he took two of each animal on the ark.  The ark was kind of like a big floating zoo!

God told Noah to do something that to a lot of people didn’t make much sense.  When Noah built the ark God had never made it rain, so there had never been such a thing as too much rain, or a flood.   A lot of people told Noah he was silly for building a big boat, but God didn’t think Noah was silly.  God knew Noah was a good man who believed in Him.  God sent all the animals to Noah to go on the ark, and when it was time for the rain to come, God closed the door on the boat so Noah and his family would all be safe inside.

Sometimes when God tells us to do something other people won’t know why.  When we do nice things for others, or tell people about Jesus, others might not know why we do them.  But God knows why.  He knows that we do what He tells us because we love him, just like Noah did.  Lets pray.

Dear God, we thank you for all that you do for us.  We know that when we have faith in you, you will always be there for us.  Just like Noah, we want to have faith in you to do things that others won’t understand, because we love you.  Amen.