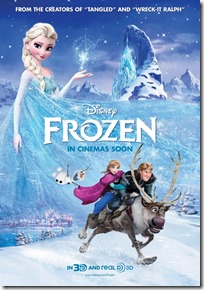 Things are getting cold this Thanksgiving. Real cold. Like 32 degrees and falling cold. Disney skates back into theaters with the all-new, animated 3D spectacle Frozen.

Anna, a fearless optimist, sets off on an epic journey – teaming up with rugged mountain man Kristoff and his loyal reindeer Sven – to find her sister Elsa, whose icy powers have trapped the kingdom of Arendelle in eternal winter. Encountering Everest-like conditions, mystical trolls and a hilarious snowman named Olaf, Anna and Kristoff battle the elements in a race to save the kingdom.

If Tangled was your cup of tea, you’ll melt for Disney’s Frozen. The female protagonist is extremely likable. The male leads are guys’ guys—strong, chivalrous, ready for adventure. The comic relief, in the form of three-foot snowman Olaf and a dog-like reindeer Sven, provide plenty of laughs and never let the mood get too serious.

Dads should be forewarned that Frozen is more musical than more recent Disney releases, but the opening number features broad-shouldered ice haulers singing about hard work so it’s not all a loss. Viewers will be impressed though as the musical numbers rival what you’d hear on a Broadway stage. Very well-written and well-performed numbers.

The themes of this movie are agreeable. Your little ones will learn about love, loyalty, and self-sacrifice. Nothing in this one to blush about or apologize for. This feature is well worth a trip to your nearest 3D theater this holiday season.

The short preceding the feature is nearly worth the price of admission alone. “Get a Horse!” features a classic Mickey Mouse and his friends battling a rather grumpy Peg Leg Pete who has his sights set on Minnie Mouse. I’ll just say the short takes full advantage of the 3D setting and offers several hilarious surprises.

Have you seen it? Are you planning to? What did you think?

Some extras
Looking for some fun family activities to go along with this movie?  Check out my FREE FROZEN INSPIRED PRINTABLE PACKS.  Plus, make sure and grab the family kit from Disney below.