In our family, we’re big fans of children’s books. It’s not unusual for us to have 20 or more picture books on loan from the library to go along with our own growing collection of titles. Picture books are great for sparking a child’s imagination, but they are also useful for reinforcing ideas and values you want to impress upon them.

Recently I went in search of picture books that could help show my youngest son what a good friendship looks like. He’s naturally extroverted and seems to make friends easily, so I wanted to teach him some ideas about friendship in hopes that he will be a good friend to those he meets. 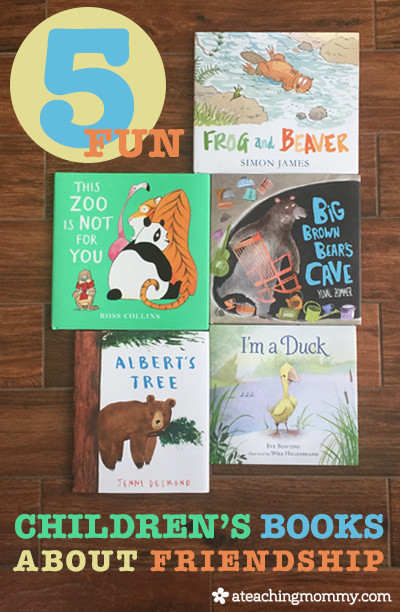 Disclosure: I received this product for free and was compensated for my time. All opinions expressed are my own and I was not required to post a positive review.

Here are a few titles I found at Candlewick Books that reinforce some important messages about being a good friend. [Don’t miss the giveaway at the end of this post.]

5 Children’s Books that Teach the Value of Friendship 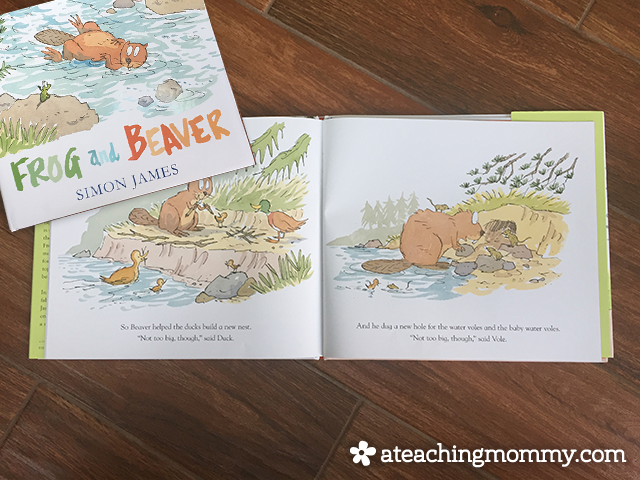 Things don’t go quite like everyone expected when Beaver moves into his new home on the river in Simon James’ new book Frog and Beaver. Frog is very welcoming and wants the other wetland creatures to be accepting of Beaver too. But Beaver isn’t considerate of the other animals when he builds the biggest and best dam the others had ever seen. His dam dries up the river and Frog, Duck and the water voles are forced to move. But then Beaver’s dam breaks and he realizes that bigger isn’t always better and his selfishness negatively affected the other animals.

Bottom line: A good friend is considerate of others.

This Zoo is Not For You 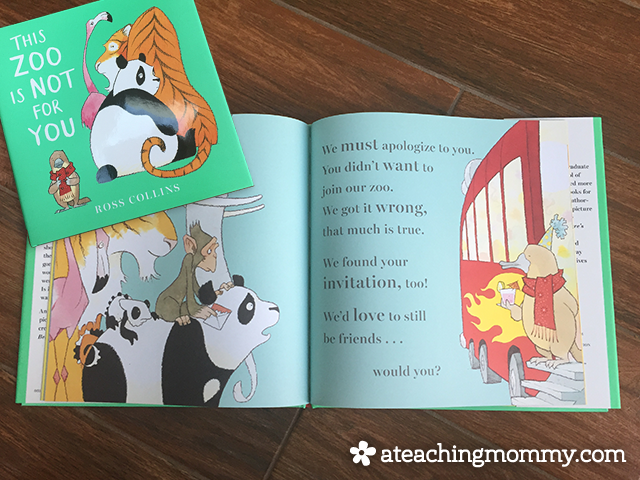 Ross Collin’s new rhyming book This Zoo is Not for You teaches some important lessons about how to treat others who are different than us. When Platypus shows up for his interview at the local zoo at the other animals think he doesn’t fit in. They say unkind things about him or point out how he is different from them. The animals quickly realize how unfairly they treated Platypus and go to apologize to him. Platypus is happy to see them and welcomes them into a party he is having.

Bottom line: We should be kind and welcoming to new friends. We should treat others kindly even when they have been unkind to us. 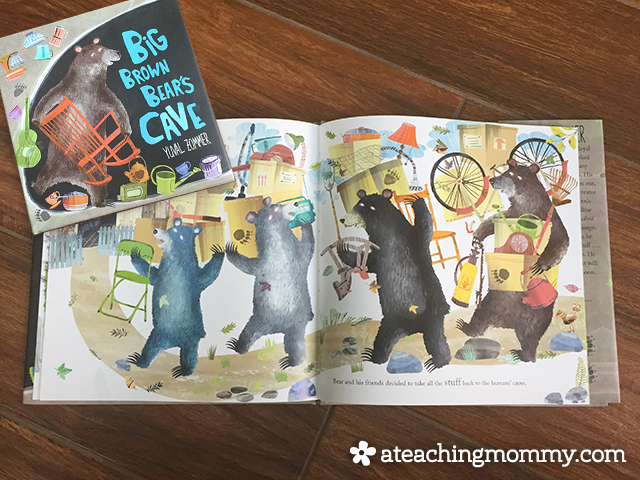 Big Brown Bear has a big lesson to learn in Yuval Zommer’s new book Big Brown Bear’s Cave. The bear sees how humans live with their caves (garages) full of things. He thinks that things must be the key to happiness. So he sets out to fill his cave with stuff and he succeeds. But instead of finding joy, he just gets stuck in all that stuff. In the end it’s his friends who free him from his stuffy cave, help clear the place out, then take up residence with him in his cave that finally feels like a home. 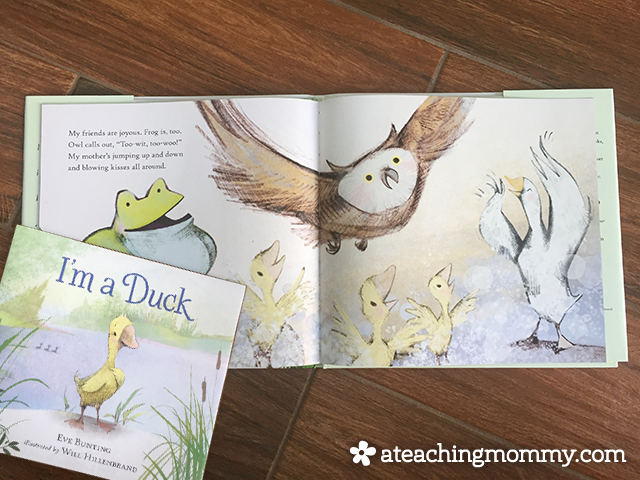 Will Hillenbrand illustrates Eve Bunting’s new book I’m a Duck about a duck who faces his fears with a little help from some friends. Duck is afraid to swim. He sees his brothers doing it, but he’s afraid he’ll sink. The frog assures him he won’t sink and the owl encourages him to build up his confidence. So the duck practices in the puddle and receives some reassurance from his mother. When the day comes to try swimming in the pond, the frog is there to offer encouragement and help. Naturally, the duck is a great swimmer and all the other animals cheer him on.

Bottom line: A good friend offers encouragement and support when someone needs it. 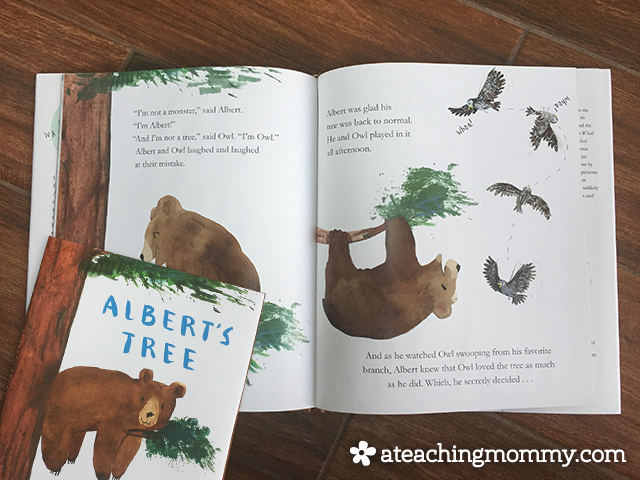 Jenni Desmond writes and illustrates about a bear who deals with a case of mistaken identity in her new book Albert’s Tree. Albert the bear wakes up from his long winter hibernation and quickly returns to his favorite tree. It’s just like he remembers except for one thing. His tree is crying. Through some investigating and after nearly giving up and moving on to find a new perfect tree, Albert discovers that the crying is actually an owl who has taken up residence in Albert’s Tree. Initially, Owl is scared of Albert, but the two become fast friends and enjoy the tree together.

Bottom line: First impressions are not always accurate. We should always be willing to share. 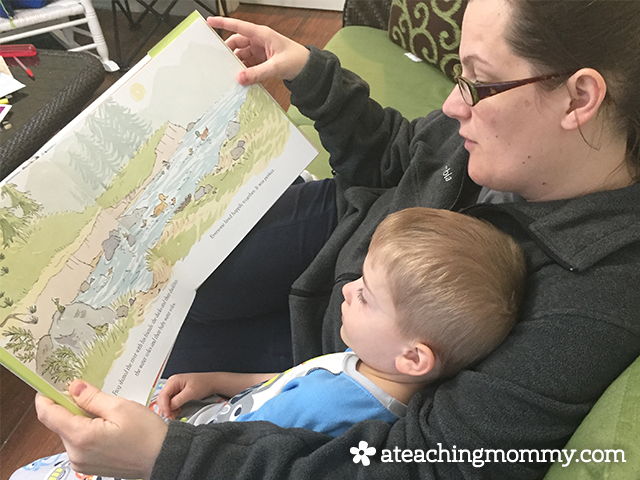 I’m sure you could add dozens upon dozens of titles to this list that would teach even more ideas about friendship, but these five children’s book are a great place to start. The important thing to remember is that books have something to teach all of us. Take some time to read to your kiddos and help them understand the value of a good friendship.

Order Direct and Save

All of these titles can be found at Candlewick Press. You can order directly from their site and save 25%  at checkout with discount code CANDLEWICK.

Candlewick Press is giving away 30 Judy Moody #1 paperback books. This giveaway is open to US and Canadian residents only and closes April 18, 2018. Use the form below to enter.