We had quite a few apples laying around the house, so I thought I should use them.  I decided to make Apple Crisp III from All Recipes.  I have never made any sort of Apple Crisp before.  Sound pretty easy? Right?

Add distracted mom to the equation and something is sure to go wrong.

As I was making the topping, I used 1/2 cup  instead of the 1/4.  So, I doubled the flour.  Fortunately, this mistake was easily corrected…just double the rest.  Unfortunately, I didn’t have enough apples to make a double batch.  So, now I have another batch of “crisp” and nothing to put it on.

I must say, for screwing up the measurements, it still turned out pretty good, if I do say so myself!

I think the boy liked it too. 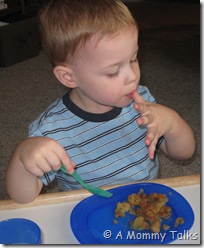 I did make some minor adjustments to the recipe, as some of the reviews suggested.

Here’s how I made it:

Then I followed the directions, but I baked it  for 45 minutes. 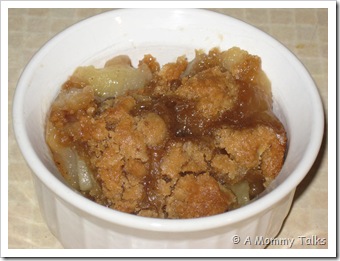 It was de·li·cious!  What is your favorite apple dish?