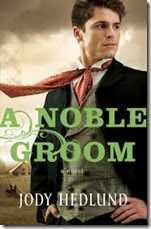 Two strangers from two different worlds forced together by unexpected circumstances. He, Carl von Reichart, is a nobleman by birth and she, Annalisa Werner is a laborer who doesn’t think she is deserving of love, even love from her Heavenly Father.  Force to leave his life behind due to false accusations Carl flees to America and into the safety of Annalisa’s family under the disguise of Carl Richards.

A Noble Groom by Jody Hedlund takes us into the rural farm lands of Eastern Michigan where German mining immigrants have settled as farmers in hopes of owning their own land. Unfortunately,  Annalisa husband was a gambler and his death has left her to save the farm.   With a small daughter and another on the way she is forced to take on a farm hand to help while she waits for a new groom from her home country.

“Annalisa Werner’s husband failed her in every way. Why should his death be any less troublesome? Although she’s given up on the idea of love, she needs a good harvest to save the farm—and a husband to help bring it in. So her father sends a letter to Germany to find Annalisa a groom.

Then Carl Richards shows up looking for work. Desperate for help until her husband-to-be arrives, Annalisa hires him—only to discover this gentle stranger is unlike any man she’s ever known. But even as friendship and attraction grow between them, her true groom could arrive any day . . .” (Bethany House)

Judy Hedlund has a way of bringing history alive in her novels.  Though this is a fictional story I came away with a simple understanding of the difficulties and struggles the German immigrants of Michigan faced in their new country. Hedlund uses this hardship to shine a light on the virtues of her characters. Through these virtues I was able to quickly connect to Annalisa and Carl. I was drawn in even more as they labored through the rigors of farming, while trying to bury their budding feelings. These are two characters that you going to love. Definitely an enjoyable read.